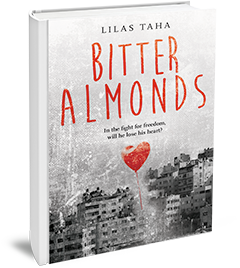 In the fight for freedom, will he lose his heart?

Moving and compelling, Bitter Almonds is about displacement and exile, family and honor, and the universal feelings of love and loss.

The plot is a snapshot of the lives of Palestinian refugees in Damascus, Syria, before the current civil war. A mosaic of rich history, deep culture, religious undercurrents, political influences, and regional wars shape its events. Omar is pulled by chains as strong as patriotic causes: Death-bed promises, friendship debts, and an uncontrollable heart. Nadia is an innocent young girl who wakes up to the world’s harsh realities.

They told five-year-old Fatimah not to turn around, but no one told her to close her eyes. No one told her not to listen. She pressed her face against the window, a rag doll forgotten in her lap. Quiet rain speckled the cold glass, and a flickering street lamp cast broken yellow beams on the desolate street. Fatimah sat mute, comforted by the soft drizzle, and watched the scene behind her unfold on the reflective pane. If she sat very still, they might forget she was there.

Her mother pushed aside the midwife’s fussy hands and scooted her huge body to the edge of the bed. Grunting, Mama got to her feet. She yanked at the collar of her cotton gown, ripping the front buttons and exposing her sweat-drenched chest. She spread her legs wide apart. Fluids trickled down and dampened the hem of her gown and the faded rug.

‘Get back on the bed,’ the midwife instructed in a raspy smoker’s voice.

‘Do as I say.’ The midwife brought her wrinkled face close to Mama’s. ‘Your baby needs help. You will not be able to push it out by yourself. You’ve been trying all day, and the night—’

The door flew open. The next-door neighbor, Subhia, walked in. She closed the door and rolled up her sleeves. ‘How can I help?’

The midwife slid her hands under Mama’s arms and attempted to get her back on the bed. ‘Come. Help me before it’s too late. Lift her legs.’

‘We should’ve taken her to the clinic.’ Subhia bent to hold Mama’s feet. ‘Now it’s too late. Everyone in the village has left.’

‘She’s stubborn. If she had done what I said, this baby would be out by now.’

‘We have to go.’ Subhia’s husband urged from behind the closed door.

‘I can’t leave her now, Mustafa!’ Subhia shouted over her shoulder.

‘The gangs are bound to head this way. I’m not waiting any longer. The children are in the truck. I’ll make room for the women. Hurry!’

Subhia gripped the midwife’s arm. ‘What do you think?’

‘We can’t even get her back on the bed.’ The midwife shook her head. ‘And I’m not leaving her. Go with your husband.’

With a loud cry, Mama squatted, bringing down the two women beside her. She gripped the edge of the bed and held her breath. Her face turned crimson and her eyes welded tight.

For a brief moment, a suspended instant in time, all the noises of the world disappeared. No raindrops tapped the window in front of Fatimah’s face. No women frantically bellowed instructions to her mother. No panicked neighbor banged on the door. Only one sound could be heard.

Fatimah ran to Mama’s side, forgetting to remain invisible. ‘A boy?’

The women ignored her.

The midwife wrapped the baby with a towel. She placed her lips over his nose and mouth and sucked hard, her cheeks sinking deeper in her bony face. She pulled back, spat on the soiled rug and repeated the process several times. She thrust the baby into Mama’s trembling hands.

Another knock shook the door. ‘Subhia, please. We have to leave now.’

Mama touched her lips to the baby’s forehead. The simple movement drained whatever energy she had left. Her head dropped back on the bed’s edge, eyes closed. ‘Take him,’ she mouthed.

Fatimah smoothed back hair off Mama’s damp forehead. ‘I will help you take care of him, Mama.’

Subhia cradled the boy, her eyes searching the midwife’s face, grim and ominous.

‘I’m coming in!’ Mustafa shouted from outside.

The midwife snatched a blanket off the bed and covered most of Mama’s body.

Mustafa stormed in, took his wife by the shoulders and pulled her to her feet. ‘Get in the truck.’ He knelt on the floor. ‘Grab whatever you need. I’m taking you out of here.’

‘Go. Take Fatimah too. I’ll stay with her.’ The midwife swatted away his hands. ‘Take your family.’

‘I’m not leaving you two behind. There’s no one left. You’ll tend to her on the road until we get to the next town. If it’s safe, I’ll find a doctor.’

‘She will bleed to death if you move her.’

‘And you will both die if you stay. You heard what Stern and Irgun gangs did in Deir Yassin. They butchered people, women and children. They will do the same once they get here. Now stop talking and get moving, old woman.’

Subhia settled on a pile of blankets in the truck bed. She had the baby in her arms. Her three-month-old son, Shareef, slept in the arms of his eight-year-old sister, Huda. The plastic tarp shielding them from rain sagged in the middle and rested on Subhia’s head.

Fatimah squeezed her little body next to Huda’s and placed Mama’s head in her lap.

The midwife climbed in. She worked on getting Mama into a comfortable position.

‘Did you remember to lock the door?’ Subhia asked.

‘I did.’ The midwife patted her chest. ‘I have the house key here.’

‘We’ll be back in a couple of weeks.’ Mustafa slammed the truck bed tailgate. ‘Once this is over.’

[F]ramed by the title and recurring references, almonds serve as a metaphor for Palestine, referring to the fertile orchards left behind and the nostalgia felt by their former cultivators. Calling the book “Bitter Almonds” expands the metaphor to cover the refugees’ disappointments and hard experience, as well as the plot’s unifying theme — a great love that must traverse a long, difficult path to be fulfilled.

Bitter Almonds is a poignant exposition of Palestinian Arabs living in perpetual exile from their homeland. This is another historical fiction story on a subject contrary to what readers usually hear and read about from this war-torn corner of the Middle East, where residents are currently being forced into exile again. Recommended reading!

[t]he novel deals poignantly with both the issue of drawing the boundaries of responsibility along familial lines and, by extension, along national lines, in the sense that filial responsibility is tied to national identity. In doing so, it offers a hopeful glimpse into the possibilities of family-building and belonging beyond blood-bound ties, which has profound implications for developing the larger, social, global family.

Lilas Taha’s great gift in BITTER ALMONDS is to create characters and scenes so richly resonant with life and vitality, that the complicated, lush world of the Middle East feels as tangible and close as any world you are living in. Crucial in our strange days? Perhaps more than anything.

In The City: Short book review in The Lady

Both an engaging romance and a convincing period drama.

Lilas Taha’s Bitter Almonds is the gripping story of Palestinian exiles in Damascus who search for a sense of home and belonging. Set against the backdrop of political upheavals and wars, the author goes beyond headline news and skillfully portrays the characters as fully-realized human beings who cope with tangled relationships bound by complicated social customs. Written with compassion and a keen awareness of matters of the heart, this is a beautiful and moving tribute to the strength of the human spirit and the endearing power of love.

-Ann Weisgraber
Author of The Personal History of Rachel Dupree, and The Promise